As a result of a worldwide pandemic, The Box Theater of Tampa Bay, like many theatres, has faced the bleak reality that social distancing and mandatory quarantine conditions make it impossible to continue. For over 11 years, this Tampa center of creativity has provided the venue, training programs, and moral support that enabled improv performers, directors, students and teachers to hone their craft. Judging from the reviews and loyal audiences over the years, The Box, no doubt, has contributed to the creative landscape of Tampa Bay and the artistic legacy of this city

The Box was a community in the truest sense. People were not only connected to this space but also, and more importantly, they were connected to one another. In that respect, the improv community will survive. Artists are encouraged and empowered to continue the work that was started here.

The values of The Box went well beyond the stage.  In many ways, they are universal and can be applied to many aspects of life, including the application to the modern marketplace. Though The Box is closing, applied improvisation training will continue in corporate and virtual settings.

The Box would like to publicly thank The Underground and The University Mall for providing affordable spaces for us, as artists, when it seemed there was none to be found.

Our doors may be closed but our improvised hearts are still open. Reach out to us. Let us know what The Box has meant to you.
Support Local if you can.
Check out our merch. The profit of the sale of these items will go directly to keeping our doors open in these unprecedented times.
Thank you.

We are so pumped for the kick-off of “March Gladness,” an Improv Show at The Box. This Saturday and every Saturyda in March 7:30pm Doors at 7pm $10 adv/$12 at the door. Seating is limited. Tickets

It’s a new year and a great excuse to tap into your creativity.  Feed your artistic soul with an Improv Class at The Box Theater. After our first session ends, we kick off another new 6-week, Improv For Everyone class in March 2020, and you won’t want to miss it. Improv For Everyone

Dear Aunt Gertrude is back with the “Last Fri,” pop up show on Friday, Jan 31 at 7:30pm. They bring in guest improv teams from Tampa Bay and beyond and a guest monologist too. Come enjoy some laughs. 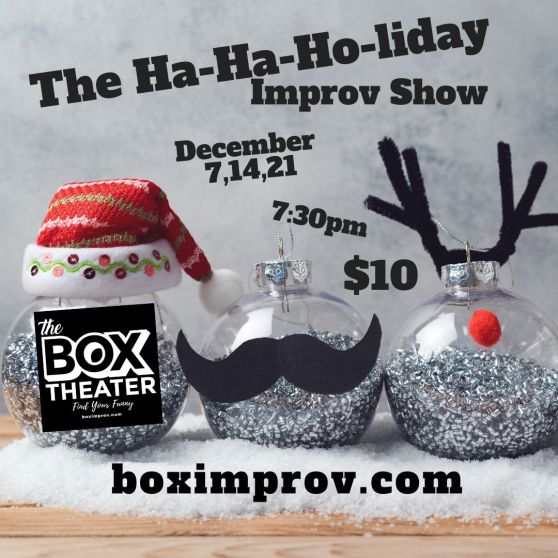 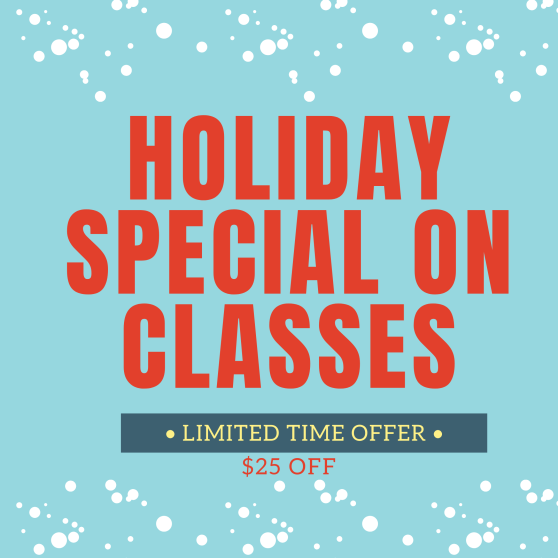 Give the gift that keeps them laughing. For a limited time save $25 on Improv For Everyone and Improv IV, Long-form Play and Performance (Until Dec 13, 2019) with promo code IMPROV2020

Come out this Friday and Saturday to The Box Improv Studio. The Box will host 10 improv teams over 2 evenings on November 8th and 9th (7pm) . We don’t have much, but what we do have (A humble stage and friends who are talented improvisers), we will use for good.

Help us make an impact. 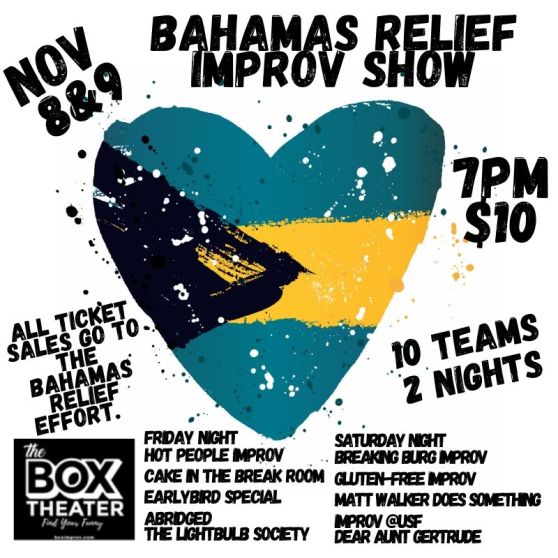 ALL TICKET SALES GO TO THE BAHAMAS HURRICANE RELIEF EFFORT.

Can I be real with you for a second?
Like, really real?
Yes?
Okay, good.

About three years ago, I moved here from Kentucky to be a professor at the University of Tampa. And I love the job. I also love the sunshine, the palm trees, the Spanish moss that grows on southern live oaks, and the manager’s special at Jason’s Deli on Fowler. I’m a man of simple pleasures.

But something was missing.

My people. My group. My collaborative mission. And a goal to work toward with this group. Where would I find such a thing?

Enter The Box, stage right. Never in a million theater seasons would I have imagined that improvisational comedy would be the missing ingredient in my Tampa life, but it surely was. Turns out I fit in well with creative types who like to perform. And I’m starting to realize that the lessons you learn in improv class are equally applicable to daily life. These life lessons come from my fabulous Box instructors (in chronological order of when they taught me): Michele, Alain, Paulie, Crystal, Rebecca, and Andrew.

Give yourself a challenge.

In the middle of my first performance in my Level 1 student showcase, I was pretending to be a DJ at a radio station. But there was no conflict, no tension, no pressure in the scene. Only after leaving the stage did I remember that I could have given myself a challenge — for example, pretending that I got a call from the station manager saying this was our last day on the air. What would I do if it was my last day on the air? In a way, improv is like embodying the advice about “living every day like it’s your last.” The Box helps me remember to challenge myself.

You can never “yes and” too much.

The Box also taught me what Jim Carrey’s character from “Yes Man,” has known since 2008: Saying “yes” to opportunities leads to an infinitely more creative life, with untold opportunities for growth. This tenet of improv is one reason why this form of comedy works with my personality more than other forms. Because it’s about teamwork. It’s about building something together. It’s about making each other look good. It’s about the community more than the individual.

One time my classmate Taylor constructively pointed out when I’d negated my classmate Anne in a scene. I didn’t even realize I had done it. But once it was pointed out to me, I made a conscious effort to say “yes” to new assertions as they arose. I made sure to accept — and add to — what my teammates gave me. That’s also not a bad way to live your life.

David Wheeler is a journalism professor at The University of Tampa and a frequent contributor to CNN and The Atlantic. Follow him on Twitter @WheelerWorkshop.

Good laughter is terribly infectious, yet you don’t see a lot of it in movies, and I’m guessing that it falls into the same category as complex special effects and scenes with animals, in that, time and money often force a director to think whether they really have the time in the schedule to get the scene.

Good laughter is also rare in today’s technological/social media age. Remember laughing so hard as a kid? Almost peeing your pants and not being able to remember what was so funny in the first place? Children laugh on average about 300 times a week, adults, 15.  Acting /Improvisation relies on being in the moment, being able to play, on stage or in front of a camera. Laughter Yoga helps to get the actor/improviser there. Whether Laughter Yoga is used as a warm-up for performance, or as I do, a daily regime, it is an exercise for the insides, laughter helps create great bonds, enhances creativity, reduces stress, improves the immune system, and it even helps people to learn faster.

Yogic breathing techniques (breathing from the diaphragm) are integrated with intentional laughter practices, (object/space work) resulting in numerous benefits to physical and emotional health. Participants live life more joyfully and are better able to cope with whatever stresses life may bring.

The overarching reason to do Laughter Yoga is that it is fun!!!  It’s really true what they say, “Laughter is the best medicine!” 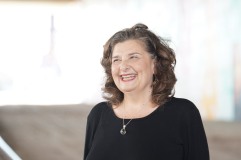 Sources: American Journal of Medical Sciences, Alternative Therapies, Psychology Today, The Scientist of the University of Maryland Medical Center (as cited in The Orange County Register)

a working actor and an ensemble member on The Box House Team, “The Light Bulb Society”

“Improvisation is essential if the actor is to develop the spontaneity necessary to create in each performance ‘the illusion of the first time.’” -Lee Strasberg

This is the crux of acting. Spontaneity.

I’ve been an actor for almost nine years, and believe me, I’ve given my fair share of listless performances. Most of the time it wasn’t on purpose, either! When it did happen, it was usually because I was in my head to the point where I would convince myself there was no other way to approach the scene or say a line that I’ve been performing for weeks on stage. It’s an even worse feeling in film and television, because the director may ask you right then and there to give them something different than what you’ve been doing, and ff you don’t have an answer, you run the risk of looking unprofessional and boring.

Luckily, actors have this cool device in their toolshed called improvisation. It can usually be found just passed the tangled garden hose, behind the empty flower pots, on a shelf of old paint cans and extra motor oil.

Careful, though… most likely, there’s a stray cat lording over it!

Although you may not be able to improvise on set (some directors will let you), you can still use improv to discover the natural or sensible behavior of your character when you prep, therefore, giving you a mixed set of logical responses when the director does insist on a different read. It acts as a safety net for those situations.

There’s no two ways about it. Acting is hard, hard work. Remembering lines, hitting your mark or finding your light, pretending there’s no audience or ignoring a camera that’s two inches from your face is tough when you’re trying to be “private in public.” The amount of homework you have is no walk in the park, either. Breaking scripts down into objectives (overall and scene), unraveling your character’s obstacles, finding beats and actions, fulfilling historical, thematical, and subtextual obligations is all a part of the job, and by the time you get on stage or on set, you got all this stuff in your brain, which you’re supposed to just “let go” when you perform. Mr. Strasberg calls this “conscious preparation – unconscious result.”

This is where improv can save you. It gets you out of your head, plain and simple. Thinking becomes secondary, and we trust our creative impulses will meld with the work we’ve done beforehand.

The great thing about this particular tool – improv – is that it’s so closely related to acting that they’re almost one in the same. Technical differences aside, the core of acting and improv is listening and reacting.   A parity of giving and taking. If you “let go,” and drop any preconceived ideas of how the scene should play out, and make it about your scene partner (relationship), then the outcome, whether it works in the context of the play or film, or not, will be truthful, and the truth is always more interesting.

Support The Box-Take me to the Merch